Do you like this car?
1970 AMC AMX for sale
Current customer rating: 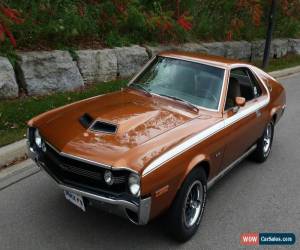 This AMX was built in October 1969. The original 360 C.I. engine which is still in the car was built on October 8, 1969. Since the restoration began in December 2007 it has only be driven on sunny days and remains in show condition. The engine runs well and strong. The transmission shifts smooth and all mechanical components are in perfect working order including the clock, gauges and radio. The following is list of items which were replaced or rebuilt during the restoration. All items were NOS or the correct reproduction. Car has had ground up restoration using over $30,000 worth of NOS, new and reconditioned parts. All original identification tags with correct date codes are present. The restoration was started in 2008 and the car has been kept in climate controlled garage ever since. The result is unmolested original car that looks as good as it did the day it rolled off the Kenosha assembly line in October 1969. The also car comes with custom car cover cut to fit as shown in the photos.

Exterior: Front windshield was replaced, the chassis was completely stripped sanded and repainted and new floor plugs installed, the front passenger floor pan was replaced due to rust, the car had some existing surface rust on the rear quarter panels which were repaired, bumpers, tail light lenses, and all chrome trim was re-plated and all stainless moldings were polished, aluminum rocker panels were re anodized, new door handles were installed, all panels were realigned then the car was block sanded and primed in epoxy primer, followed by the original Bitter Sweet Orange color followed by five coats of clear coat. wet sanding and high speed polishing. The paint is still perfect with no scratches chips or dents. The Magnum 500 wheels were sanded repainted and NOS center caps installed. All emblems and decals have been replaced with reproduction or NOS. All plastic light lenses have been replaced or restored. New stripe was then installed. The grill on the car is original and in excellent condition. The tires are not original to the car but for handling purposes it currently has BFG radials installed. When sold the car will come with an extra NOS oil filter.