Do you like this car?
1970 Ford Mustang Mach 1 for sale
Current customer rating: 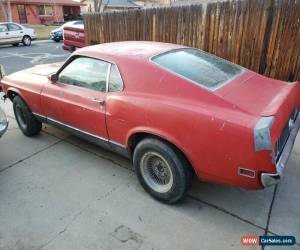 It was originally Raven black with white Mach stripe, black interior. It's code car (351C 4V) original with VIN stamped on back of block. It came with factory speed manual but someone replaced it with C4 auto. Brake pedal is still from manual car. It has wheel drum brakes. It has rare optional shaker hood scoop. Someone cut the bracing out of the bottom of the hood to make the radiator fit. have the standard Marti report for the car.

I purchased the car from guy who had it since 1989-1990. He never had it plated but drove few miles now and then. He purchased it from neighbor and told me it was sitting in their backyard for 5-6 years before he purchased it. It is not running now but was running when purchased it 11/2015.

As you can see it will need lots body work and rust repair. From what can see the bottom side is not that bad. There was no driver window for more than 30 years. replaced it with one from 1970 sports roof. It has been painted several times.