Do you like this car?
1970 Porsche 911 E Targa for sale
Current customer rating: 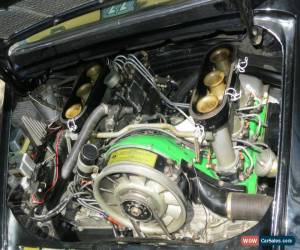 Photos to follow. The batteries are dead so I've ordered two lightweight AGM batteries and will get the car out of storage once they are fitted, and take lots of photos. Here is photo of the engine when was changing the air filter, oil, and oil filter, original seat and steering wheel.
This is German sold, originally Irish Green 911E,  that was bought new by an RCAF officer on 18th December 1969 in Lahr, Germany. have the original German Pflegpass and COA. The car was brought to Ottawa and later sold to CanAm champion Horst Kroll. It was then was owned by two Porsche enthusiasts and the second of these two friends restored the car in 1989 when it was 20 years old and had done 100k km. While it was being painted (black) the owner had the engine rebuilt by Auguste Lecourt. The engine looks and feels newly rebuilt and the performance is astonishing (the crescendo of power from 4-7000rpm beats anything from the 60's-70's I've driven.) The next owner had the car for 15 years and he works in Europe so only used the car on holidays back home in Ontario.
I bought the car just over two years ago and have only driven it few times each year just to give it some exercise (and give the kids thrill.) had planned to strip the black paint, return it to Irish Green and replace all the rubber (most of the seals are in poor shape.) have bought the front windscreen seal, door seals, engine firewall insulation (the original old one was falling apart), new horn grills, stainless side mirrors (to replace the later plastic mirrors, and was going to order new seat covers for the original tan Recaro seats (seams have separated) and carpets (faded and worn.) The car currently has some black 1980's Porsche high-back seats fitted and Momo steering wheel (the original steering wheel clearly hasn't been used much so is in great shape.) have the matching black rear seats in case the buyer wants to keep it all black.
Mechanically the car is very sound and is blast to drive. It has been well looked after and has tools, original date stamped 1969 Fuchs 6x15 wheels in great condition, several books and fat file of receipts etc. found the receipt for the dying batteries-- they lasted years-- not bad for Canadian Tire! I'm only selling the car to fund another project and free up one garage space. can deliver the car to your shipping agent in Montreal or New York for small fee (fuel plus return ticket.)
I'll put lots of photos online next week and some videos. have advertised it locally so may pull the listing early if it sells.