Do you like this car?
1976 Cadillac Eldorado Convertible for sale
Current customer rating: 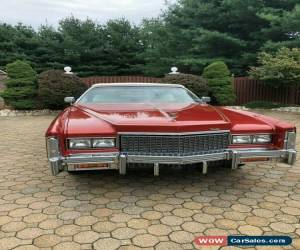 This is “pristine” 1976 Cadillac EldoradoConvertible.   It has very desirablecolor combination of red with white interior. The car has 25 original miles. Yes, you read that right!  Let mespell that out…TWENTY-FIVE…not 2500, not 250….25!Let me give you little history about this car because amsure you are scratching your head in disbelief and confusion.  purchased this car in 2009 from collectorin NJ.  knew the owner well and he tookgood care of the car and never drove it.   He purchased the car in 2003 from the estateof collector and his car museum in NC.  have allthe proper documentation of this sale and an odometer statement from 2003.   If youlook at the images provided in this listing, you will see that the originalwindow sticker is still on the car.  The caroriginally came from dealership in Los Angeles called “Thomas Cadillac.”  The dealership was run by LaRue Thomas and itwas located at West 7th Street/Bixel.  LaRue Thomas also had museum on the 6thfloor of the building with over 100 cars. I believe this car was moved straight from the showroom floor to the museumfloor when they realized it would be “the last of the big convertibles.”  In 1989 they closed the business and sold thebuilding.   The cars were moved to awarehouse.  His collection was ultimatelysold and dispersed in 1993.I am not “car guy” and bought it as an investment in2009 because knew the collector and how meticulous he was at taking care ofhis cars.  I’ve had it for 10 years and am ready to sell.  This has to be one of the lowest mileage carsfrom the era.  It belongs in an advancedCadillac collection or even museum!  If you are serious buyer then you will probably want to come and see it inperson.Here are some links for more information about the originaldealership/Museum this car came from…http://articles.latimes.com/1989-02-09/news/vw-3246_1_thomas-cadillachttp://articles.latimes.com/2004/may/05/local/me-thomas5Someone mentioned that thehubcaps aren’t the factory 76 Eldorado.  was told by collector that the rims are original but someone had them completely chromed and then added chrome baby moon hub caps to snap on to the center of the rim...and finally adding the Cadillac Logo to the chrome baby moons.