Do you like this car?
1984 Toyota Land Cruiser BJ42LV for sale
Current customer rating: 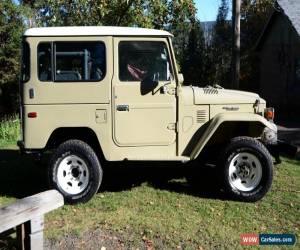 This is the rarest Landcruiser out there.  I am told only around 250 of these trucks were even imported to North America and supposedly they all went to Canada, none to the US.  This cruiser is not to be mistaken for any other model as the 1984 was the only year that produced this combination of goodness in Landcruiser.   This truck runs drives like dream and has 251846 original kms, or 156489 miles.  I own 2007 Tacoma and this Landcruiser drives smoother and quieter than my Tacoma...  It is 1984, the LAST year of the classic body style, it has the famous 3.4 3B Diesel engine, Factory power steering that works incredibly,  front disc brakes and suspension unique to this model as well, very smooth ride.
A little history behind the truck:  I purchased it from the original owner.  He bought the truck brand new, right off the lot in my town, Williams Lake, BC, in 1984.  He meticulously cared for the truck and only drove it back and forth to school he was school teacher).  This truck is one owner truck and was taken care of to the ultimate degree for its whole life.  When got the truck, it had sat for quite few years, but the owner had gone out and started it at least once year and drove it to the end of the road and back to keep things moving.  The paint was rough and sun bleached and it needed freshen up inside and out.  We completed this restoration without removing the body, It wasn't necessary, however, new body mounts were put in in several places.  There was some small rust spots along the spot welds of the tub, where the inner fenders meet it.  They were professionally removed and re-welded, eliminating all rust completely, then properly sealed with epoxy primer and painted inside and out. new 90 degree lip was welded along the length of the inner fender to attach it to the outer fender.   All the paint was sanded off this truck down to metal and new metal was welded in professionally with mig welder where ever needed.  The seats had also been ripped on the drivers side bottom from getting in and out all those years.  So we re-upolstered the seats.  I have the original covers if somebody wants them, they are almost perfect.  There was small rip in the bottom of one of the rear jump seats as well, so we recovered those too, to match the front seats.  The licence plate holder was missing, so new one was bought from cruiser corps.
Due to keeping originality, when painting, we decided to leave the original undercoating (applied at Toyota) underneath the fenders, front and rear, it was quality undercoating, in perfect shape and didn't seem necessary to take it off before re painting.  The rest of the truck body was originally undercoated when it was new at Toyota as well, and all is in perfect shape, this is probably what saved the body from the usual rust.
We cleaned the frame inside and out and re painted it black and sprayed the inside as well.  The frame is mint.
All the original rubber plugs and caps are in order in the floors, the original tool bag (zipper still working!) with the original tools and mounting rubber band, is still in place with original mounting.  The original jack and attachments were perfectly intact just repainted to freshen them up.
We put new muffler (just the muffler and tail pipe) on it and replaced the shocks with new ones and we replaced the rear leaf springs and shackles and bushings.
Every seam on this truck is clean and beautiful and original.  There is probably no other one like it out there.  Most of these original bodies disapear and are replaced with aluminum ones or other bodies that just aren't the same..
We didn't touch much in the engine compartment, except change the fluids and filters, the motor starts first touch of the key and even when it's cold, which it is now in canada, it starts perfectly with no smoke.
The transmission works perfectly as does the clutch and the brakes are super powerful and will stop on dime..
It has the original winch and I'm not sure if the winch bumper is original or not but it came like that from the dealer in 1984.
I have stack of original documents from the original owner, services done by Toyota, original bill of sale from Toyota, etc.
The list goes on, wanted to post more pics but it only allows 24, if you want to see more specific images, let me know in message.
This is the absolutely the ONE, the Unicorn of the Landcruiser family.