Do you like this car?
1993 Chevrolet Corvette SNAT 425 for sale
Current customer rating: 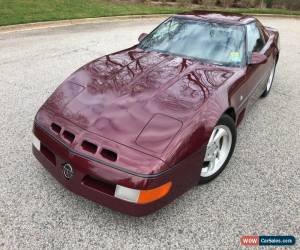 I'll just say, I've driven this car couple of years ago. It's as nice as the pictures and description suggest. But further, it was just really easy car to drive. The engine was strong, but extremely docile. It idled and drove just like stocker, but with more power. There were no trade-offs, no extra little things you had to be aware of, etc. Just nice, strong, well sorted, easy to enjoy car.

It's exactly what you'd want in convertible, and exactly what you'd expect from Callaway.
Joe's Report:I have driven this rare and special Callaway and she is sweet but with POWERFUL punch! love the color combo with the distinctive Callaway Aerobody. Truly stunning work of rolling art. This Callaway has been in the best, caring hands since it was delivered new and would be wonderful addition to your collection or perfect way to start one!
And most recently from Steve, at the Website, CorvetteBlogger.com: Not all superheroes wear capes and not all Callaways use forced induction. We sure do love our Callaways around here and this one is just another example of why.
###