Do you like this car?
1998 Ford Mustang 2-door for sale
Current customer rating: 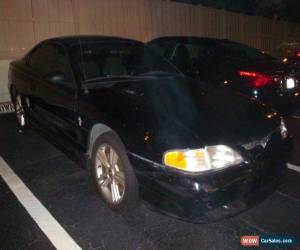 No certified check scam deals please.    We Know about it already.    Thanks.

Listing this for my buddy and will be happy to try and answer any of your questions.

We have key and clear title ready to sign over.


Millage has been stuck on 105000£?...   It has been like this for few years as we know and has seldom been driven in that time.
Must get sold fast and so the first reasonable offer takes it.

The car does not run at the moment and needs some other TLC but it's most likely not that bad.    (In other words we know the engine is not blown and that the tranny is all good.)

My buddy who is out of his mind already, sometimes gets silly and has done all sorts of strange stuff in the way of tinkering to this car and to other mechanical devices which continue call to him but usually to their demise.

These tinkering sessions never result in improvements in the performance (obviously since he has no idea about that stuff) and often left this car where it could not be driven, sometimes leaving himself stranded resulting in tow trucks and more than few very happy mechanics.   No idea why he does it.   once heard him say he thinks something is wrong and he than started unplugging wires and pulling fusses and than putting them back in but sometimes not to the same spot.    He does not do these to try and gain performance and he is not race car driver and in fact drives slower than my Grandpa.

It is frustrating for family and friends.
I did learn magic trick from all this though which is, can make tow truck appear out of nowhere, Just let my buddy look under the hood of your car for couple of minutes, he will find something wrong and try to fix it for you at that time.  BAD IDEA! )


For long period of time he has been obsessed with messing with the distributor and fusses.    have ridden in this car few times over the years and there were times it ran fine and other times when it had some bizarre problem that sometimes sounded like one or more cylinders was not firing and it's my understanding that the battery was not charging for the last few months and so he replaced the battery.   (Really?) Yeah really.

I don't think the new battery fixed that problem since even brand new battery does not charge itself.   Not sure if that problem got fixed but would bet he tried to fix it and the car is dead now in that it will not start.

I do not know if it turns over but wont run or if it does not even turn over.    think we have experienced both of these problems over the years.    It's all the same to my buddy which is that somehow one of the wires must have gotten plugged into the wrong spot or perhaps two or more of the fuses where playing around and switched places or took break like as in vacation.
The tinkerings never involved wrenches as far as we know so like he never took stuff apart except for stuff that could be taken apart with only screwdriver and pliers.     That was the extent of his tools luckily though he was dangerous enough with those.

This was the last straw for the family that it won't start again which happened several months ago and though listed it at that time we could not locate the key or the title which have now recently both been found.

That's how it is now.   It won't start and have now idea about anything else.

Not sure but it could be an easy fix which you may do upon inspection and testing when we close the deal.
Has new Battery, AC condenser, and several other items, most of which may or may not have actually been needed.

Please agree that inspection is on you when you accept the car and take ownership.

We have now found the key.   It was missing before and understand they are costly to get without having one to copy.

The Driver side door has been opened the hard way (like broke into) but seem to work and it even locks and unlocks.    It also has other accident damage on the driver side.

Other side (passenger) looks great as do the front and rear.
This has the 40 year anniversary mag wheels that match the logo.

When you win please Pay Pal me $60 deposit and than come get to work in Fort Lauderdale Pomano Florida.