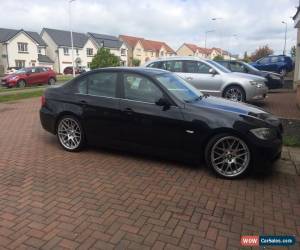 Welcome to the listing for what has possibly been the best car have ownedI generally only keep cars for year or so and also own another two fun cars at the moment including one other BMW. The 330d was bought as my everyday driver years ago now and has just been that great an all rounder haven't known what to change it for. Its comfy, quick enough to overtake with ease, fun when the situation dictates and very economical for the performance it delivers. It'll be getting replaced either with newer 530d or 535d as with growing family could do with the extra space, otherwise would have simply bought another newer 330d its been that good. In my ownership and just under 55,000 miles its been extremely reliable. had to have the water pump replaced shortly after bought it due to it leaking water and the thermostats were done at the same time. The starter motor was playing up with an intermittent non start back in November last year and was also replaced. Other than that its required nothing other than the usual consumables and regular servicing. It drives very well and it would be easy to believe it had half the mileage shown on the clock. cover 60 miles day which is mostly dual carriageway so the car generally sits at under 2000 rpm most of the time. I'm 38 now, and have my other cars for out and out enjoyment so it really has had fairly easy life for the last years. Its always warmed up properly and the turbo allowed to cool down after any long motorway runs before switching off. there's no untoward knocks or bangs and it drives great. It is an SE spec car, but has sport suspension, seats, steering wheel and rear bumper The spec of the car is immense including the following in addition to the standard spec:Electric folding mirrors Puddle light LED's in the door handlesi driveSat Nav Cruise ControlSport Auto Gearbox Heated leather m-sport seatsParking SensorsCD Player Auto Xenon LightsAuto Wipers In addition have added Upgraded 19" CSL style alloys which in my opinion really set the car off. They've also had new front tyres around 2000 miles ago. There is also Parrot Blue tooth hands free kit fittedIt is HPI clear and has full service history BMW until just before 100,000 then independent specialist since. The I-drive computer shows another 6000 miles until the next service is due V5 Present having just had my private plate removed and two keys here as well Now the bad bits. Not huge amount to list here, but just want to be clear on the listing so there are no disappointments. The car has done 155,000 miles and much of that on the motorway or dual carriageways with this in mind there is the expected stone chipping to the front bumper and lead edge of the bonnet. There are two thumbnail size car door dings in the back passenger door. These can only be seen from certain angles, small 10mm chip on the front passengers door which needs touch up and scuff and couple of scratches on the rear bumper. The alloys are in good condition, but have couple of small kerb marks. The back pads and tyres have life left in them, but will need relaced shortly. Overall when polished up, though the car looks great as can be seen in the picturesThe car is located in Dunfermline, Scotland around 20 mins from Edinburgh Airport. I'm happy to pick anyone up from the airport or local train station if your coming from further afield. £200 deposit through paypal required to secure the car with the balance payable in cash or bank transfer on collection Re listed due to zero rated ebay user MC067 who clicked the buy it now button and has since been removed as an ebay user. The car is listed elsewhere, so reserve the right to remove the advert at any time Thanks for looking