Do you like this car?
2008 Ford Mustang for sale
Current customer rating: 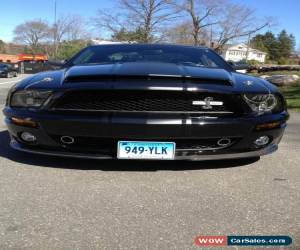 Up For sale is beautiful Black on Black fully optioned 2008 Super Snake with only 4400 miles. This Shelby was bought new at Team Ford in Las Vegas and was shipped to Shelby in Feb 2009 and was transformed into a monstrous Super Snake and was completed in May of 2009. bought this car in August of 2011 with 2800 miles and had the car sent to Tasca Ford, (Authorized Shelby Service Center) where this car was injected with even more power including Kooks headers. All of the mods went on the car's registry which can be confirmed by emailing shelby Las Vegas. This rocket produced 707 hp at the wheels on rainy day and should be in the 750 range which translates to 850 hp at the motor. It comes with the car cover and jacket as well as all the receipts. This car turns heads everywhere it goes. It has dvd based navigation as well as ambient lighting. Looking to sell as I'm bored with it, will consider interesting tradesDash is signed by Caroll Shelby