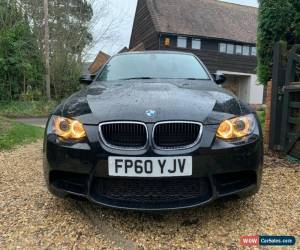 READ ADVERT :
Lowest mileage m3 e90 in the Uk ?
People say ‘ low mileage ‘ and look at the advert and it’s 45000 or 65000 well I’m at .....7380
Well FP60YJV registered 06/01/2011 at stratstone derby BMW .
Then sold 7/12/12 via MAIDENHEAD BMW  3812 miles .
Bmw mileage verification paperwork present along the way .
Car is in my name have the v5 . Plus all the other books and associated bits /two keys .
7380 miles just had service at Bmw and health check .
THATS 7380 I’m using it can’t help it but only bit .
Mot December 2020Taxed Full Bmw service history
No debate it’s real .
Black on black with heated seats .
Novillo black leather with dealer retrofit heated Bmw oem kit fitted at Maidenhead BMW invoiced at £599) at used car purchase in 2012 .
Privacy glass which could be removed .
19 inch alloys with over 7mm /7.5 mm Michelin sport tyres all round measurements from 12/2019 health check .
I have over 50 pictures which can easily send to you save you wasting your time and my mine .
Videos of underneath the exhaust looks brand new there are paper part number labels still stuck to suspension components. No rust what so ever .
Two keys all the books service book, original sales documentation.
Car was dormant and forgotten about till August of 2019 from 2013 to 2019 when it was found by friend of mine and it had to be purchased time and care was taken before starting the engine the interior still smells and feels new to the touch obviously on finding out that the car was of such low mileage I’ve had the car revitalised to this condition which has taken lot of time and thousands of pounds You can’t just start car that’s switched off years ago .
New battery New tyres All fluids .Even sucked out the petrol and replaced it before start up .Antifreeze replaced Brake fluid
But wanted BMW to give it the final check over know theyre plenty of really good specialists but while car still has full Bmw history it nice to retain it and get the stamp in the book .
The engine and drive train can only be described as new .
I’ve had all the fluids changed the continental tyres were squared off but still 6mm but cracked .( it simply HADNT moved )
It was taken for it’s first ever mot It passed no advisories .
Luckily the car had been dry stored .
There are few light marks on the boot lid where items were on it but nothing serious but where do stop?
It’s an LCI CAR so later rear lights and sat nav /entertainment/hard drive .
Non EDC which in this case was probably good thing .
Nice being manual car .
The reg is the pictures never had reg change .
But obviously hpi it for yourself and see .
No timewasters I’ve told you what know .
Staggering performance from the rarer and more practical of e9x m3s
Absolutely brilliant to drive ,Bmw health check only amber kerb mark on alloy. The rest was all green which is great for the car at main agent .
I had 30000 mile coupe which was ‘tight’ couple of years ago but this is like going back in time driving 7000 e9x m3 well they are lot better than 80 ones with shiny interiors and every single moving piece is worn leading the car becoming ‘hobby’ .
Car has been detailed Someone’s going to fall in love with it .
A px if it helps you bit but let’s say hmm £8k max and that’s what Webuyanycar value you at M3 is £19500 on wbac, glasses guide £22500 no silly offers ll park it and in 20 years see where we are .
IT IS WHAT IT IS .
IF YOUVE GOT TO HERE YOUVE READ THE ADVERT .
ADVERTISED ELSEWHERE wallys weirdos, timewasters, internet experts need not contact me ...
Will sell at any point .
REG NUMBER IS THERE FOR YOU TO HPI .