Do you like this car?
Mercedes-Benz: S-Class S55 for sale
Current customer rating: 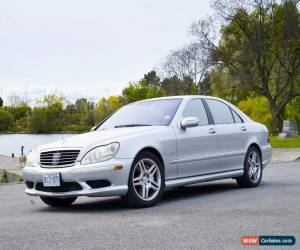 Up for sale is this 2003 Mercedes S55project car. This is great winter project and with spring around the corner you will have one awesome ride.The car ran fantastic before removing the engine. The engine didhave coolant leak, which was going to repair. was told it would be easierto repair with the engine out.

I stumbled across 2004 SL55 engine with3,000km on it.  So my friend talked meinto building the SL engine up into monster hp motor.The SL engine was complete except forcylinder heads and supercharger. My friend dropped the pan and front timingcover to check everything to make sure the engine was in usable condition. Hebelieves the engine has less then 3,000km. The ink stamps on the timing coveris still visible, the paint on the main bearings is like the day it was putthere by the person that hand built this engine. The piston, and otherinternals look new and in great shape
So this is coming with the car.The car itself had 112,000 miles/197,000kmon it. Options the car hasSupercharged 5.5 LitreDTS, Parkassist, Navigation, Dynamic frontseats, Heated/Cooled seats all around, Reclining rear seats, Napa Leather, Keyless go, Reardoor blinds, Rear window blind, ABC, CD changer, Dual climate control, Paddleshifting,  Power opening/closing trunk,Soft close doors and all other Mercedes standard S-Class options. New parts already installedTires, drive belts, single idler pulley,high performance billet aluminum double idler pulley, trunk hydraulicpump/motor, front engine cover, battery and more. Rims could use refinished.
You can buy complete engine and drop itin or use the low mileage engine supplied. My thoughts are use low mileage enginethen you pretty much have brand new engine in the car. Engine was removedfrom 2004 SL55, which was not even driven past the break in period. was told the person bought brand newSL55 and wanted it faster and ton more horsepower. When they bought the car arace engine was ordered from the US that was sleeved, custom made rods, pistonsand so on. The person used the original heads which were built from the machineshop bough the 2004 SL55 engine. The person did not want to have the car sittingfor month or so while engine was being built in the US so he had the shop inthe US supply the block etc.  My friend that was helping me has movedhalf way across country and because of my health issues cannot do this on myown. had such plans for this car. It is/was my dream car. The body has somesigns of wear interior is very clean, no rust, all options worked, ABC workedflawlessly(looks like it had some recent work done and all components look veryclean, AC system is still intact as according to WIS there is no need to removeFreon  as the compressor just rests inframe, transmission still in car which will be secured for transport comes withnew Mercedes front seal right from dealer(figure the seal should be done whilethere is access to it. This is great car to save money on one ofMercedes finest sport sedan. If you are industrious person you could have itback up and running easily in one weekend at relaxed pace. Will be really sad to see car go. had itlisted before pulled the engine but just could not let it go. Now reallyhave no choice. Would prefer to see someone that wants to build it back to all it glory, would have to part it out because of personal reasons. The car is way too good of car to be parted out. With everything supplied someone could make fantastic car, then part out the extra parts and make decent profit. The front calipers sell for $800 each, crank for $1,100 and so on. Would rather see it on the road then siting in shop coming apart.  The low km engine has front timing cover,oil filter housing, water pump, harmonic pulley, oil pan, oil pump, flex plate, thermostat, tensioners, newcrank bolt, new front crank seal, coolant seals(two seals which go between thefront cover and block (where original engine was leaking), MB sealant for timingcover/oil pan, everything you need but heads. Engine is very clean inside and out!
What will come with car:Original engine(the engine that came out of the car tore down. Heads, oil pan, timing cover removed crank and pistons still in the block)  but all parts supplied
Engine with approx. 3,000km/1,846 miles onit.This is the second engine so the above and complete low km engine minus heads intake manifold.
Original supercharger,Spare supercharger2 usable right heads1 usable left head1 left head with bad cam bearingThe below are form the car
AlternatorAC compressorTandem ABC pumpFlex plate
Valve covers.
Extra set of valve coversExtra Flex plate so in total
3 timing covers one extra then the two from above engines
3 rear seal covers(two are installed on the above engines).
Every bolt bagged and labeled where it isfromEvery piece that was removed from the car.If get asking price the following extraswill come with car:Engine hoist used once to remove engine,engine stand, harmonic holder tool(bought from dealership)the tools are almost $700 alone, it would be like getting the car for $6100 and you have tools for future use. Heads from 2002S55 one ported and polished(was told they flow better then the superchargedheads) so was going to run these. So know will get question like does itdrive? No it does not there is no engine in car.
I can send the PDF of the AutoCheck
The sale is as is where is buyer isresponsible for pick up and removal of car and all it components. truck andtrailer will be needed or an anything along those lines. Car must be picked upwithin two weeks, car does not leave till paid in full, am willing to helpassist in loading.Bidders with less then 20 feedback or anynegative feedback contact me prior to bidding or bid will be canceled. Title is clear. $500 nonrefundable depositrequired immediately at sale.   Ask all/any questions before bidding lookat pictures and figure out if this is the car for you.

If it does not go by middle to the end of February will hire someone to put it back together and keep it. Spring is coming and this is fantastic summer ride

I am interested in your car and I would like to get more information about it.
Thank you
Mrs Rasha