» Cars for sale in Canada » NSU » Other Makes

Do you like this car?
Other Makes for sale
Current customer rating: 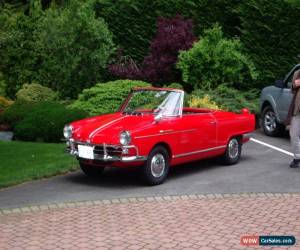 This 1966 NSU Spider (imported from Germany) is known for itshistorical significance. It was the first car ever produced for the generalpublic powered by Wankel rotary engine. The rotary engine was later licensed by many other car manufacturerssuch as Mercedes, Mazda, Citroen, Suzuki, etc. The Spider has since been declared national treasure inGermany and as result can be imported into Germany with no taxes or duties. There were only 2,375 units made and currently only 71 are knownworldwide. Most of the cars manufactured were sold in Germany and do not havethe extra bumper guards located in the front and back of the car. Only theNorth American cars have the added chrome bars which make them even rarer.  215 were sold in North America.

This car has no rust at all and has been garage kept, it has the new modern apex seals in the motor and runs great and drives unbelievably well. Clutch master cylinder is little stick and should have new seal replaced.
It has an upgraded ignition system and do have the working original. The soft top is new.