Do you like this car?
Volkswagen Beetle Late 2003 1.6lt Petrol for sale
Current customer rating: 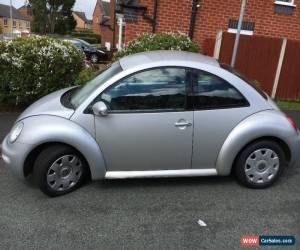 Reliable and presentable VW Beetle. Has never let us down or not started. Serviced annually, brand new tyres (never been driven on), recent battery. In good condition but it is 13 years old so it has the odd mark and scrape. Check the photos.Central locking doesn't work and after washing it today the rear hatch light is on (common fault should go out when dry)
2 former keepers, my daughter owned it for the last four years, keeper from March 2007 through August 2012 and the owner from new before her.Large file of previous mots, invoices etc.
Enhanced newer interior, compete with working air con and electric windows. No stereo as it failed couple of weeks ago and the brand new one currently in it will be removed.
11 months MOT. Daughter has new job so has bought newer smaller car is the reason for sale. Car is in Cannock and will not be sold with the private plate on it.
The 53 Reg plates are included. Reg was registered November 2003.